The remarks from the US official came in wake of the Palestinian decision to reject the administration’s peace plan.

US PRESIDENT Donald Trump and Prime Minister Benjamin Netanyahu arrive to deliver joint remarks on a Middle East peace plan proposal at the White House Wednesday.
(photo credit: JOSHUA ROBERTS / REUTERS)
DES MOINES – The US is actively pursuing normalization between Israel and numerous Arab countries in the Middle East, a senior White House official told The Jerusalem Post on Sunday just a day after the Arab League rejected the administration’s new peace plan.yThe official, who spoke on the condition of anonymity to discuss sensitive relations between the White House and Arab countries, said that three measures were currently on the agenda: non-belligerency agreements with Israel, direct flights between Israel and Arab countries, and allowing Israel officials to attend events in Arab countries.

“We have been working behind the scenes to get it ready,” he said.

Last week, ambassadors from Bahrain, Oman and the United Arab Emirates attended the unveiling of the Trump administration’s Middle East peace plan, often referred to as the “Deal of the Century.” Their attendance was seen as a warming of ties between Israel and the Arab world.

The remarks from the US official came in wake of the Palestinian decision to reject the administration’s peace plan. A few media reports indicated frustration among Arab countries from Palestinian Authority President Mahmoud Abbas’ decision not to take a call from President Donald Trump just days before the White House ceremony.

However, the official noted that moving forward with normalization between Israel and Arab countries is not a step meant to replace the peace plan.

“It’s an initiative led by Jared Kushner, together with his work on the peace plan,” the official said.

“It is a separate track that the team has been working on for a while. After we released the plan, we saw that the reaction in the Arab street is very moderate and that many of [the Arab leaders] were ready to do it,” the official continued. “When only Turkey and Iran said that they are against the plan, people [in the Arab world] realized that a line had been drawn.”

The official wouldn’t say when the first agreement would be reached. “We don’t like to set timelines, but there is a ton of momentum,” for o. 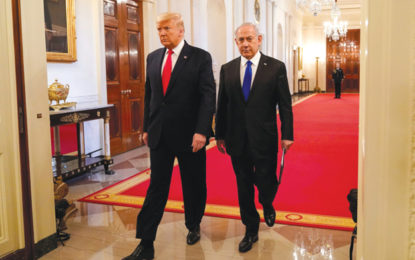 The remarks from the US official came in wake of the Palestinian decision to reject the administration’s peace plan. US PRESIDENT Donald Trump and Prime Minister Benjamin Netanyahu arrive to... END_OF_DOCUMENT_TOKEN_TO_BE_REPLACED